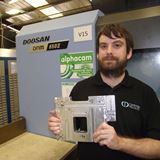 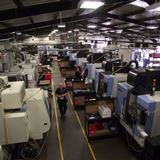 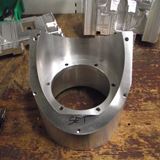 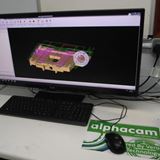 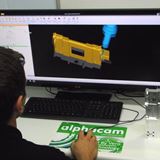 Andy Barnard, Milling Supervisor at Cambridge Precision Ltd., was instrumental in the company investing in 5-axis capability. They already used ALPHACAM CAD/CAM software to program their 27 milling machines, and he says it is now a vital part of their 5-axis operation.

"A lot of what we do involves having a tool just 0.1 or 0.2 mm away from the 5-axis table or vice, and the simulation gives us absolute confidence that when we start cutting metal there won’t be any collisions."

The company ships hundreds of thousands of components a year, manufactured predominantly in aluminium, along with a variety of steels, brass, copper and copper tungsten. Nearly every job they were doing on their 3-axis mills involved more than two operations, with many requiring four, five or six ops. He says that he, along with Production Manager Nick Raven and programmer/setter Tom Szablicki, could see the advantages of moving over to 5-axis, and the directors agreed with their recommendation.

“Originally we were considering looking for a full 5-axis machine, but chose instead, to have Nikken tables added to two machines.” The tables have given a Haas mill full 5-axis simultaneous capability, while converting a Doosan 650 into a 4 + 1 machine.

“Straight away it reduced the number of ops down to two. The complete cycle time for one component in particular – a container tracking box – has been slashed from 75 minutes to under half an hour, and it also saves a lot of time on making fixtures.”

Manufacturing a wide variety of components for several industry sectors, including medical, pharmaceutical, aerospace, and automotive, he says the company is looking to expand its 5-axis capability and invest in more seats of ALPHACAM. “It’s got to be the way forward, especially as it’s so easy for ALPHACAM to produce 5-axis programs.”

Cambridge Precision have used ALPHACAM for around 15 years, and Andy Barnard says they have at least 100,000 programs stored, any one of which can be used as a potential starting point for new jobs which require similar products. “We can quickly load up the existing program to give an estimated run time, and this will pay dividends on 5-axis work.”

He says ALPHACAM also assists in the quoting process. “For example, if a job calls for a block to be roughed out we can use ALPHACAM to get an accurate cycle time for it within a few minutes.”

Their ALPHACAM programming is done offline on any one of six suites, by a number of skilled engineers, with programs being sent via the server to the appropriate machining centre. After the initial set-up and full inspection of the first off, the machines can run for 24 hour periods, utilising the night shift.

Components come in all shapes and sizes, from 10 mm squares with a hole, up to 300 mm square X-Ray housings, along with parts for machines designed to test electronic wafers, microscope housings, CD facia plates, and aircraft parts.

Customers supply a solid model or DXF file, and Andy Barnard says it is especially easy to program jobs on the solid model, apply the toolpaths, and send it out via the Post Processor to generate machine-ready code. As they undertake a range of 3D machining, ALPHACAM’s versatile Machining Styles function is particularly valuable, as is the powerful simulator.

“We use Simulation all the time, which saves us scrapping the part and damaging the machine or vice, or breaking the tooling. And it’s an essential aspect of the 5-axis process, as we’ve got the machine configurations loaded, along with tool holders and tools. A lot of what we do involves having a tool just 0.1 or 0.2 mm away from the 5-axis table or vice, and the simulation gives us absolute confidence that when we start cutting metal there won’t be any collisions.”

As well as CNC milling, Cambridge Precision has a number of lathes, and also undertakes laser marking and electro-mechanical assembly at its St Neots factory. Operating with 85 employees, the company has an annual turnover of £6m.

“The complete cycle time for one component in particular – a container tracking box – has been slashed from 75 minutes to under half an hour, and it also saves a lot of time on making fixtures.”