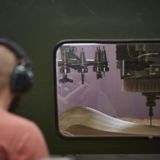 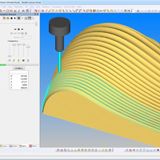 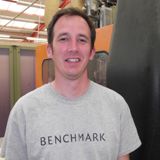 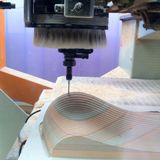 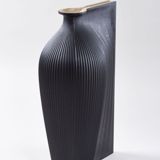 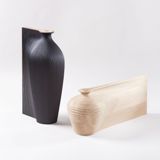 A company set up by renowned designer Sir Terence Conran used ALPHACAM, from Vero Software, to create two vessels in a special design partnership for his brainchild exhibition at the Victoria and Albert Museum, in London.

In partnership with the American Hardwood Council, ten diverse designs were tried, tested and crafted as part of Sir Terence’s 'The Wish List' – a project which paired ten world-leading creative minds with a younger generation of rising talent.

"It's extremely important to our manufacturing process. If we didn't have ALPHACAM it would probably take us around 75 per cent longer to do everything by hand."

Sir Terence, co-founder of long-standing ALPHACAM customer Benchmark Furniture, instigated the project when he asked his designer friends: “What have you always wanted in your home, but never been able to find?”  Under their mentorship, young up-and-coming names designed and produced the items, which were displayed at the V & A as part of the London Design Festival.

The pieces were crafted at Benchmark’s studio and factory in Kintbury, West Berkshire.

For one piece, designer Zaha Hadid had always wanted tableware made from wood, and mentored Gareth Neal, who used the form of a carafe, turning it into something more sculptural. Benchmark programmer/operator Colin White was tasked with modelling, creating the toolpaths and machining the two vessels on an SCM Record 220 P router.

“Each vessel had to be completed within a week, and I wasn’t even sure if our machine was capable of doing it. This is where ALPHACAM came in, both as a software package, and as a Group.” ALPHACAM Technical Manager Andrew Harfield spent two days at Benchmark, advising them on the full process. His first recommendation was to adopt 3+2 machining, which Colin White had not undertaken before.

“ALPHACAM took our machine to new heights with this project, and has given me confidence to take on equally complex projects in future, now I know what the SCM can do with ALPHACAM.”

After being designed in Maya, the file was imported into ALPHACAM as a Parasolid, while some additional work was done in Part Modeler. With the surface being made up of a number of grooves of differing diameters and radii, they realised they could not use just one tool for the operation, and carried out considerable research before opting for Vortex bullnose cutters. “We began with roughing passes using 20 mm cutters, then coming over with 12 mm, before finishing with 4 mm.”

Andrew Harfield also assisted in setting up an additional workplane to access the harder-to-reach areas. “We couldn’t get down to the lower aspects, but the different workplane gave enough definition with the 4 mm bullnose to get in to give a perfect finish,” says Colin White.

Several pieces of stock were set up in Part Modeler. “Because both vessels get smaller towards the top, we didn’t want to machine away something that wasn’t going to be part of the actual finished piece, so we needed to use more than one billet of wood for each one.” The first vessel comprised six billets, and was 700 mm long and 400 mm high, with a 350 mm diameter. The second, produced from three billets, was 450 mm by 750 mm, with a diameter of 350 mm.

To ensure that the machine was capable of producing such a complex item, he ran the program through ALPHACAM’s powerful simulator, including the quick simulation facility which simply showed that the toolpaths were accurate and collision-free, rather than detailing each individual move. They also produced a prototype of half the vessel in MDF. Finally, the post processor was perfected, then adjusted for the second vessel.

When Colin White was confident of success he ran the ALPHACAM program on the SCM. “Without ALPHACAM there was a very real possibility that we’d have had to outsource the operation. But Alplhacam produced two superb items, which featured in the Wish List exhibition.”

Sir Terence says: “The willingness of these designers to share their incredible skills and passion with a young generation of highly talented designers is what makes The Wish List so special and important.”

Benchmark Furniture was founded over 30 years ago, and now operates with a 50-strong team from 40,000 square foot premises, working extensively with hotels, restaurants, public buildings, offices and private residences. Colin White uses ALPHACAM programs regularly to cut a variety of hardwood and softwood, MDF, ply, acrylic, nylon and Corian. “It’s extremely important to our manufacturing process. If we didn’t have ALPHACAM it would probably take us around 75 per cent longer to do everything by hand.”

“It’s extremely important to our manufacturing process. If we didn’t have ALPHACAM it would probably take us around 75 per cent longer to do everything by hand.”