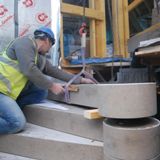 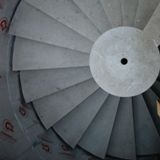 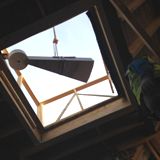 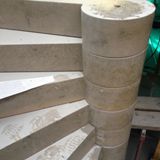 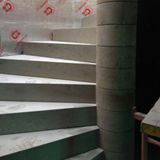 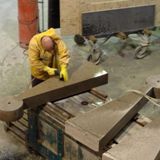 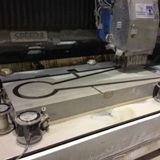 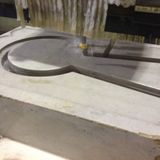 “We really struggled with our existing software, but it’s so easy with ALPHACAM.”

At a depth of around 175mm, the Jura blue-grey limestone was the thickest material Toffolo had ever machined, as they normally work with 20 to 30mm thicknesses, occasionally going to 50 or 60mm. Managing Director Kenny Turnbull says new tooling was needed for the contract – and taking the vacuums and tooling length into account they were working right to the limits of their machine. “We had to create special blocks, and worked with the material on a jig made from a slab of quartz to give us the height we needed. This project, for contractors Stephen Gardiner Construction Limited, was new and innovative for us, but ALPHACAM ensured we could complete it accurately and quickly.”
He says ALPHACAM Stone not only speeded up the programming process, but also gave them confidence for a collision-free machining operation, and that each step would be totally accurate. “The risers had to be high precision so they would fit together perfectly. We installed the staircase in less than two days, but if there’d been discrepancies either at the workshop or when we got on site, it would have taken considerably longer.”
As well as manufacturing, supplying and installing the 2.5-metre high staircase, Toffolo Stirling built the engineering brick surround which the stone keys into. They also worked on the kitchen, several bathrooms and fireplaces for the exclusive property at Comrie, in Perthshire.
Denholm Partnership Architects originally drew the staircase in Autocad and sent the work to Toffolo Stirling as a DWG file. “We split out the elements and, in consultation with the architects, amended some of the sizes to make it work better and integrate it into the surrounding brickwork, without compromising the architect’s design.”
Once Toffolo Stirling’s drawing office had finished their work the Autocad drawing was placed on the server, and the CNC programmer then downloaded the file, applied and programmed the different tools, and ALPHACAM automatically created the optimum toolpaths. Then it was sent to the Brembana via a serial cable and the operator set the machine ensuring all tools were in the correct stations. “Programming the work in ALPHACAM Stone took around two hours and gave us a total of around 64 hours machining time, as each step was on the Brembana for around four hours, and then our masons handfinished them.”
He says ALPHACAM cuts down programming time considerably compared to their existing software, and also enables them to take on work which would not be profitable without it. “Almost everything we do is a one-off. So saving time on programming is a major advantage. We’re writing programs constantly, maybe doing 20 or more a day, so even taking just 10 minutes off each one is a huge benefit.”
And Kenny Turnbull has found another use for ALPHACAM’s powerful simulation function. As well as running programs through the simulator before starting to cut the stone, to ensure they are collision-free, he uses it as a sales tool. “We can show customers exactly how we’re going to manufacture their order.”
In conclusion, he says ALPHACAM is a major technological asset to Toffolo Stirling, as one swiftly-produced program drives the machine through all required operations. “The biggest benefit to us is the speed. If a company sets up a machine to produce hundreds or thousands of identical parts, the programming time probably isn’t too important. But to us, working mainly on bespoke one-off items, shaving off just a few minutes on each is absolutely vital. And because there are never any glitches with the software, it gives us confidence to take on more complex work, knowing we can deliver on time. Although we’re not working to engineering tolerances, we digitise the templates and need to be sure that the finished product is exactly as the template.”
Based in Stirling, and part of the Stirling Stone Group, Toffolo Stirling manufactures in a 7,000 square foot factory, displaying a wide selection of granites and marbles in a 2.5-acre yard. Whilst regularly working on standard kitchen worksurfaces, they focus on one-off bathrooms, flooring, kitchens etc, to large, high quality, new build housing, and restoration projects, along with shopfitting work to hotels and commercial properties.

From the Vero Software stable, ALPHACAM Stone has been specially developed to address the unique challenges encountered when machining marble and stone.
• 2D and 3D geometries can either be created in ALPHACAM or imported as DXF, DWG and IGES files, as well as solids. The profile of form cutters are created within the system, with controlled diameter and depth point.
• When cutting and polishing a contour, multiple tools need to be used. ALPHACAM Stone achieves this by creating a machining style combining one or more operations, which can be saved and applied to any geometry. Kenny Turnbull says when polishing an edge the wear on the head is evened out by oscillating it up and down. “We really struggled with our existing software, but it’s so easy with ALPHACAM.”
• A closed geometry can be pocked with an unlimited number of islands inside it. ALPHACAM Stone will control the tool to remove as much material as it can without gouging the part. If a pocket is incomplete because the tool is too large, a smaller tool can subsequently be selected to remove the material left, and ALPHACAM only pockets those areas, instead of retracing the first tool.
• ALPHACAM’s core drilling capability controls breakout on the underside of worktops to prevent the edge chipping. Roughing of 2D and 3D cavities with a core drill can be automatically generated.
• 2.5D machining comes into effect where a profile is required around a contour or pocket. Rather than using a form tool, a 2D profile or draft angle can be cut using a flat or radius tool, by driving the profile around a geometry. The tool then generates the profile by following this geometry in multiple depth passes, moving out and down.
• With the disc being one of the most powerful tools on a CNC stone cutting machine, ALPHACAM provides powerful disc cutting functionality. Profiles can be machined around contours such as mouldings on the side of fireplace surrounds.  When roughing, a width cut greater than the blade can be specified, ensuring the blade uses its full width, avoiding unnecessary stresses. And the finishing operation involves using the side of the disc, either horizontally or vertically, and by a given step length.  Discs can also be used to rough or finish 3D surfaces and STL files – a technique often used to machine the underside surface of spiral staircase treads.
• ALPHACAM Stone supports 3+2 machine tools when planar machining, for allowing areas to be accessed which would be impossible on conventional 3-axis tools.

"We couldn’t do that with the proprietary software, but it’s so easy with ALPHACAM.”