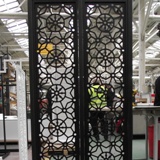 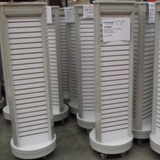 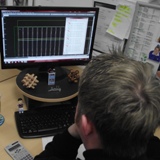 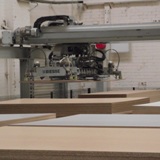 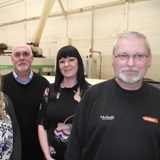 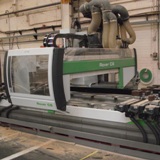 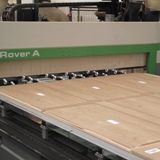 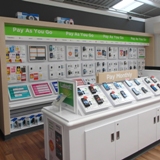 ALPHACAM CNC software plays a vital role in automating a manufacturing cell producing display systems for leading store fitters Alan Nuttall Ltd.
The cell comprises a Biesse Rover driven by ALPHACAM, a Winstore storage and retrieval system, along with a Biesse saw. Production Director Bob Williams says it has revolutionised the way they work since it was installed in 2013.

“The owners invest in the company every year, which means we can always be at the forefront of hardware and software technology.

Established in 1966 to offer the design and manufacture of produce display equipment for retailers, the business now operates with 600 employees from three sites totalling almost 1-million square feet of dedicated production and logistics space, supplying interiors to a range of clients including supermarkets, fashion and electrical retailers, cafes, hotels and restaurants.
Work is split evenly between wood and metal products. But even after increasing the number of ALPHACAM-driven CNC routers to four, they still could not achieve the required output on wood for their rapidly growing client base. “We saw there was a massive need for change, and that prompted us to invest in the new cell.”
When the cell first became operational at their West Midlands plant, they nested to stock, but as they discovered more about ALPHACAM’s capabilities they switched to nesting first, meaning they now know exactly what stock they need. CAD CAM programmer Neil Hurley says: “A good nest is of paramount importance in terms of material utilisation. The boards are optimised so we can order the correct amount of material, meaning the final cutting has to replicate that.”
The manufacturing operation begins with a DXF file of the drawing, which may contain up to 20 components for one complete unit. “We pull the drawing into ALPHACAM and separate all the parts out. The edgings are removed, because they’re mostly drawn with those on, then each part is programmed with a toolpath and saved under an individual drawing number. As the actual production is run on CSV files, we create a cutting list and ALPHACAM reads particular fields within that file, to run the macro.”
Working to quick turn-around times within a tolerance of 0.5mm, most dividends come from the cell’s speed and accuracy enhanced with automation and bespoke macros. The production flow begins with the Winstore retrieval system collecting a board and placing it in an area at the head of the Rover, where ALPHACAM automatically positions labels on the sheet ahead of it being cut.
“As the board then moves into the machining envelope for the parts to be cut, the Winstore collects the next sheet, so it is labelled and ready for cutting as soon as the first one comes out. This is all part of the bespoke process ALPHACAM set up for us.”
The software’s ability to work with new parts for prototyping is another important aspect, as the company regularly bring out different products. “It’s also so easy to manipulate existing parts in ALPHACAM,” says Neil Hurley. One of their additional Biesse machines has an edgebanding facility and he frequently needs to adjust files which are not drawn to the radii he needs.
Bob Williams says his staff members who use ALPHACAM put the finished, nested program on the server and the operator loads it into the machine. “Then ALPHACAM’s technical wizardry starts working, Winstore retrieves the boards, they’re labelled, fed into the machine and cut.
“There’s no change to the way the machine operators work because the ALPHACAM Post Processors transfer the code into Biesse language. They load the correct file into the machine, and run it.”
He says the company has been on a massive learning curve since installing ALPHACAM. “There are so many additional benefits: not only has the cell changed the way we carry out machining but we’ve been able to improve our tooling, too. We used to work with tungsten carbide tools but now most straight cutting is done with a 16mm Z3 three-wing diamond, giving a much improved yield.”
And with two releases of the software each year, both containing important new and enhanced functionality, he says their ALPHACAM journey will be never-ending. “The owners invest in the company every year, which means we can always be at the forefront of hardware and software technology.”

“The owners invest in the company every year, which means we can always be at the forefront of hardware and software technology.”
Bob Williams, Production Director