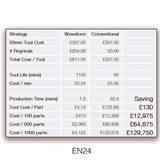 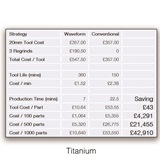 Vero Waveform Saves Tool Costs of Over £100 Per Part

The results came from trials using a Seco 20mm tool, cutting components from EN24 steel. Vero’s Strategic Partnership Manager, Wesley Tonks, says: “Tool life is dependent on how the tool is implemented within the machining process. We always state the increase in material removal rates when utilising the Waveform strategy instead of traditional machining methods. However. there are additional massive financial benefits to be realised with the reduction in tooling costs.

“The Waveform strategy utilises the full flute length of the tool, gives improved stability, less stress, and improved swarf evacuation which ensures even wear, meaning a financially beneficial regrind programme can be introduced.”

And Waveform increases the tool life before each regrind is required. For example, during the trial, the £357 tool was reground four times, as well as there being 275 minutes between each regrind. This meant the total tool life going from 60 minutes with conventional machining, to 1,100 minutes with Waveform. Waveform also speeded up the operation, reducing the cycle time from 22.5 minutes to 7.5 minutes.

Even cutting Titanium, Waveform extends tool life from 150 minutes to 360, with three regrinds, delivering savings of £42,910 when cutting 1,000 components.

Waveform was originally part of Vero Software’s EDGECAM milling package, but has recently been adapted for turning…and is now also included in ALPHACAM, WORKNC and SURFCAM.  As well as the extensive savings brought about by the constant chip load, Waveform also delivers considerably improved material removal rates, minimum tool vibration, deeper cuts, and increased speeds and feed rates, with a smooth toolpath which avoids sharp changes in direction, maintaining the machine’s velocity.

“To conclude, it is very typical to have smaller batch sizes but to realise savings the whole manufacturing operation needs to be appreciated,” says Wesley Tonks. “Looking at where particular tools are being used and consumed across many operations and machines will expose manufacturing production facilities to increased savings.”